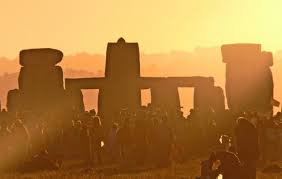 The sun,
ever the opportunist,
climbs toward its apogee,
unopposed.

The noon sky brightens.
Shadows shorten.
Will gives in.

A young child caught in midair giggles.
Daughters of The Evolution dance.
Sons of Faith swoon.
Dark burdens are lifted.

Stonehenge may remain stone,
but rivers of light flow through its surface,
cracking its mystery.

The hidden depths of ancient tribes reveal themselves.

A world of light
unaware of its magnitude,
streams its blessings,
multiplied.

We humans,
ever the opportunists,
catch each one and count it.

The sun and its graceful climb.
Its warmth and light.
The journey itself.
Love. One another.

These things I count as blessings of the light.

Written by Ross Foti in mid-June as Summer Solstice nears and with it the rising optimism of a brighter world lit with inspiration and kindness on June 18, 2014 in Claremont, California. Namaste. © Ross Foti 2014